Ironman 70.3 Marbella and our Spanish travels so far

I guess I should start the blog by saying, things happen for a reason and last year my wife and I decided that after nearly 20 years in Birmingham it was time for a change. Many reasons and years of discussing if the grass is greener elsewhere, led us to this momentous decision. The farce known as Brexit gave us the final push, along with our respective businesses running their course.

Never doing anything by halves, we decided to sell our house, my wife’s business, close the shop and take some time out of the rat race and see what life throws at us. After much discussion about where to live and what to do, we came up with the idea of chasing the sun around Spain to start with, and so far it’s been a great plan. We are thoroughly enjoying ourselves.

With our love for food and travel I thought I best enter a race to keep some sort of a training routine going while we are on the road otherwise I would pack on the pounds before I know it. So IM 70.3 Marbella seemed as good as any, and more importantly it is in southern Spain where the sun would definitely be out. Oh and just to keep me honest, I have entered Ironman Vichy as well. Definitely nowhere to hide now!

First stop was Girona and what a great place it is for riding your bike – both road and mountain bike! This is definitely a place I will return to in future with great food on offer, the clear waters of Lake Banyoles nearby (also home to an annual ITU event) and nice beaches only a 30 mins drive away. I guess it’s no surprise that so many top class cyclists and triathletes base themselves there. The only negative from a training perspective was the cost of the pool. 12 Euros per person – a bit steep if you ask me but then again it was a top class facility with a 50 meter and a 25 meter pool plus you get to train alongside Frodo if you’re lucky ? 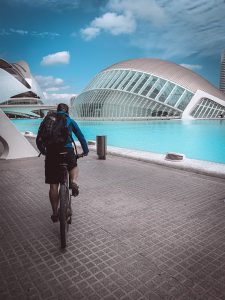 Anyways onto Valencia for a few days. This time no swimming as logistics were a bit difficult with leaving our dog Harvey alone in a pristine Air BnB (say no more…) and to our surprise, loads to see and explore. Good thing we are traveling with our MTBs as it made sightseeing a lot more enjoyable. It was a revelation really, cruising round Valencia, taking in the sights and more importantly the tapas! All those years of walking around cities for hours on end! I shall be riding from now on, and besides I’m not getting any younger! We stayed in the old fishing quarter El Cabanyal right by the beach, which had a really cool vibe and a great local food scene.  If you are ever in Valencia, definitely worth a visit. Good for runs along the coast as well.

After Valencia it was time to head to the south coast – we booked a great little place in a typical Andalusian hill top village called Mojácar, just east of Almería, AND with a 25m indoor pool would you believe! Turns out if you buy a ‘10 entry ticket’, it works out half the price, bonus as we stayed for a month! Unbeknown to me Mojácar seems to be a bit of a triathletes’ base with quite a few well-known athletes using the pool. On one particular morning the Norwegian ITU lads were banging out a few easy lengths. Being the observant coach that I am, I was surprised to see how much rotation they were swimming with (90 degrees). I didn’t get the chance to ask if it was something they were working on or if that’s how they swim. Less frontal area makes sense in a pool or calm waters, not so sure when you are getting the shit kicked out of you in an ITU race or a rough sea swim… food for thought though. 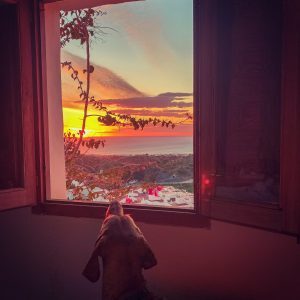 Living room with a view – Mojacar

The month in Mojácar seemed to fly by, with our daily routine of walk Harvey, do some exercise, do some work (stop laughing) and walk Harvey again, this time on the beach (Mojácar is split into two parts – pueblo and playa) with a coffee stop. Thank god our dog has finally learnt to chill out a bit (maybe the Spanish mentality is rubbing off on him), which is why we stop for coffee now and it makes afternoon walks a whole lot more enjoyable. Evenings were spent chilling in our awesome ‘living room with a view’ or going for another stroll and this time for a cheeky glass of Rioja if we could muster up the energy to walk up the steep little streets of Mojácar pueblo – not for the faint hearted. We frequently saw people taking a little breather outside our house ?

Sadly, our time in Mojácar was over before we knew it and it was time to head to Marbella and the 70.3. My training had gone pretty well for me; no running issues, which is my usual injury curse, and just trying to keep it as consistent as I could, doing something at least once, or even better, twice a day. I knew the bike was going to be tough having spent a bit of time riding down that way many years ago. 1400 meters of climbing in 90km is going to hurt, especially if you are still carrying your winter warmer coat.

Race morning rolled round and Carol dropped me off nice and early. I always like getting into the transition early to check my bike and get set up. Nothing worse than being late and finding an issue with your bike. I once managed to break the valve on my tub at Challenge Roth a few years ago…. if you run tubs you’ll know what I mean, nightmare scenario. 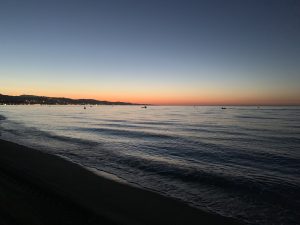 Anyways, back to race morning, being late April the water was still pretty fresh at 7 am. So I decided to skip my usual swim warm up and do a land warm up instead. It’s always good to get the HR up a bit before a race so it’s not such a shock to the system once you hit the swim. Marbella was a rolling start, which I have to say, I am not a fan of; I much prefer the intensity and adrenaline of a traditional start. I seeded myself between 25 and 30 minutes, which was about right as I swam 27 mins and change. A pretty uneventful swim really, just got my head down and got on with it.

Into T1, grabbed my bag, wetsuit off, bike shoes and helmet on (you know you are getting old when you stop attaching your shoes to your bike in T1). Mental note – I shall start doing proper transitions again. Never nice running in your bike shoes!

Out onto the bike course and a flattish 5k to start before we hit the first long climb of about 13k. Most people seemed to be holding station on the climb and no heroes were flying past which is unusual early on. The bike course is on wide fast roads so the descents on this hilly course are super fast. Basically, get as aero as you can and hang on. I prefer the Obree approach – get as stretched out as you can, bum right at the back of your saddle and arms stretched out like superman. It’s definitely a rapid way to descend, give it a try if you are a confident cyclist – it’s even quicker than sitting on the top tube!

Feeling pretty solid on the bike I started pushing on a bit with about 30km to go. I think it’s always better to be overtaking in the back half of a bike than the other way around and a strong bike finish puts you straight away in the right frame of mind coming into T2. I was clearly pushing a bit too hard coming into T2 and left myself no time to get my feet out of my shoes. Back I go running through T2 with my bike shoes on – rookie mistake! 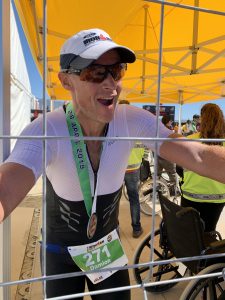 Out onto the run and I felt average. I was running at just under 4:30 min/km pace which is where I am currently at. Sadly, everyone else around me was running at sub 4:00 min/km pace. It’s tough mentally when everyone is overtaking you and you feel like you are going backwards but you just have to stick to your own pace and not get sucked into someone else’s race.

I made my way around the run sticking to my own pace and trying to enjoy myself. After all that’s why we do it, right? I finished up with a 1:36 half marathon averaging 4:35 min/km, which I would have taken before the race.

All in all I am pretty happy with my performance, considering my current fitness levels. But now it’s time to up my game and get some good miles in over the next few months. Just as well our time in Spain is not over yet! As I’m sat here writing this blog, we are on the Costa de Luz – probably the most beautiful stretch of coast I’ve come across in Spain so far. Pristine, empty beaches, turquoise water… but nestled between the Strait of Gibraltar and Portugal’s Algarve, it’s also the windiest coastline so teaching me some good lessons in overcoming my pet hate – pesky headwinds (probably has something to do with growing up in windy Wellington). Mustn’t grumble though as the sun’s out every day!

See you on the road,