So I have to start this race report 8 days before race day. Don’t worry though – I won’t bore you to death with a day-by-day account. Anyway, I was getting my race rig ready for the final key session. Race wheels in, a good going over and clean, when I noticed a crack on the underside of the chain stay (for all the non-bike geeks amongst you – this is the part of the frame where the rear wheel slides between) SHIT!! F***! 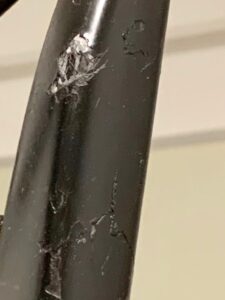 What to do? I realised pretty quickly that it was unrideable… and won’t mention the fact, that just the day before I was descending down a mountain pass in Austria with my usual reckless abandonment (I consider myself pretty lucky on that score!). Immediately I tried reaching out to Cervélo direct with an email, plus contacted the local Cervélo dealer in Austria. Not surprisingly, no joy there (it was a Friday evening after all).

Time to set the road bike up with some clip on bars then!

Going over my options again and again all weekend – I was already busy surfing the web for a new bike – I fondly remembered my trusted carbon repair contact back in the UK. Having sent plenty of customers’ bikes in for carbon repairs over the years, with good success, I did a quick Google search and what do you know – there was a carbon specialist 90 mins away who could get a last minute repair done for Wednesday. Result! First thing Monday we bombed it to Innsbruck to drop the frame off.

It’s a 6hr drive from Vorarlberg, where we’ve been staying all summer, to Cervia (Italy) via Innsbruck, so we set off Wednesday morning to get there in good time. Picked the frame up en route, handed over the readies and headed to Cervia. A side note here – Aurel, the carbon repair guy – did a fantastic job. He really knows his stuff and is a top bloke. If you are ever in need of a carbon repair in Austria look up Cult Composites in Innsbruck.

Mistake number 1. I should have built the bike up in Innsbruck as I was planning.

Thursday morning I started building the bike back up. Slight problem, there was no top cap for the headset. Good thing there was a local bike shop just down the road from where we were staying. A quick trip to the shop and 5 Euros later I was all set for a cheeky recce of the only hill on the course. Happy days! The bike was running well and the climb was short and steep (…much like a lot of the climbs around Brum). Finally I could relax a bit – it had been a stressful few days worrying whether I would have my TT rig for the event….not what you want before an IM! 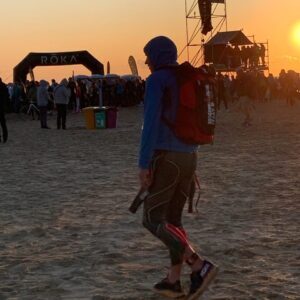 Race morning rolled round and the dreaded stupid o’clock wake-up call greeted me as always with the usual race day morning mind games…. ‘shall I just stay in bed?’,’it’ so nice and cozy’…. ‘get up you lazy so and so’!

With 3000 athletes (IM Italy is apparently the biggest event in the world with 6000 athletes participating in various distances over the weekend – mayhem, say no more), transition was always going to be a bit hectic (and bloody long), so I wanted to get in early and get my bike set up. No dramas on that front, now it was just time to chill and wait for the start. I decided not to bother with a swim warm up as the outside temp was 12 degrees and I didn’t want to stand around for 20 mins getting cold (defeating the point of a warm up really). Instead, I tried to ‘muscle’ my way to the front of my swim pen, to get off to a decent start. Needless to say, testosterone levels were running high and I never made it to the front. I must have started about a 100+ back or so.

The gun went, and we were off. 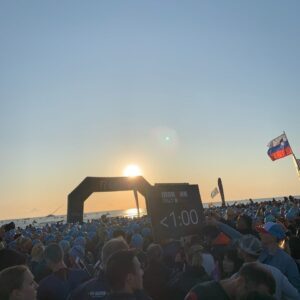 Fighting for space in the sub 1hr pen

Running down the beach and into the sea, my surf lifesaving days came in handy once again as it’s a pretty shallow beach so lots of ‘dolphin diving’ and hurdle style running before you started swimming properly. I’m not one to begrudge athletes for seeding themselves a bit higher up, but seriously I must have overtaken about 20 athletes before the first buoy. They looked like they should have been in the 1:10 pen at best!! Rant over.

As I said above I spent quite a few years at Maranui Surf Club in Wellington where I grew up, so I do enjoy a good sea swim. The rougher, the better! The swim felt pretty comfortable for me; I did the usual feet surfing where I could and otherwise did my own thing. I was surprised to come out in 54 mins low as I felt pretty relaxed throughout. It must have been that familiarity with the sea. Or it was a bit short!

Through the monster transition with no dramas and I was away – even with a flying mount, not quite cyclo-cross style, but good enough for this old man. Once out on the course I settled into my rhythm and was chugging along nicely. About the 30 km mark you hit a little ramp, a welcome opportunity to get out of the saddle and stretch the legs, but something didn’t feel quite right. As I stood up to push, it felt as my brakes were on or something was stopping me from turning the cranks over. I pulled over to investigate and realised the lock ring had tightened itself hard against the frame. In effect it meant that I was screwed unless I could get hold of some Allen keys!

On a positive note, at least I could ride the bike, albeit, it was way harder than it should have been. So I cracked on hoping I would find someone with some Allen keys before long. After much frustration in trying to ask for Allen keys from spectators, locals and even motorbike officials (turns out, not many people speak English in this region) and watching, what seemed like, half the field go by, I made it to the next feed station another 30 km up the road. With all that extra effort I was really feeling it at this stage and was thinking I should just call it a day now. And would you believe it, no one had any Allen keys at the feed station! I really had had enough!

Now you would think why didn’t he carry a set with him?! The answer to that is – I have never needed them before in a race, and I do pride myself on my mechanical skills. Sadly for me, in my haste to build the bike back up, I forgot to tighten the small bolt that holds the lock ring in place.

With little option, I started asking locals in the village if anyone spoke English. Lucky for me a young lad eventually did and between him and his father they got me a 8mm Allen key. I loosened the main crank bolt just enough so my cranks were spinning freely. Now for those of you that are mechanically savvy, you are probably wondering about tightening the lock ring.

Mistake number 2. In hindsight I should have tried to track down a 1.5mm Allen key.

Anyways, after what seemed like ages I was at least up and running, and after all it was a race! Up and over the hill climb with no dramas I was thinking I might just get away with it. Haha…. I wish! Once I heard the chain rubbing on the front mech, I knew it was just a matter of time. Turns out not very long!! A proper comedy moment is when you are riding along and all of a sudden your crankset is hanging from your bike shoe!! Sometimes you’ve just got to laugh! 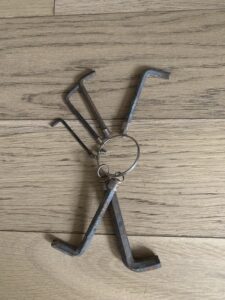 I shall keep them for the next race ?

So by this stage I am in the middle of nowhere with just a few farmhouses in sight. Now it was really time to go door knocking and meet the locals. As I approached the second house some kids came running out and asked if they could help. They fetched their Mum who managed to track down an Allen key set with an 8 and 1.5 mm key which she kindly gave me as she thought I might need them.

Comedy moment number 2 – in all that time we had been communicating in pigeon English. As I was about to get going again, she said “Viel Glueck” (good luck in German). You are joking me! We could have been speaking German the whole time, and believe me, it was a long time!! Haha.

Back to the race or now more like a Saturday outing. My frustration had disappeared long ago. Now all I could do was laugh about it and get my head down and finish the bike course or bail out and head for home, which I nearly did before heading out onto the second lap. I could certainly feel the extra work I had put in during the second half of the ride, but stuck with it and rolled into T2 in 5hrs 29. Looking at my Garmin I’m guessing I would have rode about 4:45 without all the breaks and resistance from the crankset.

Now the hard part – do I run or call it a day? Carol (my wife) was wondering the same thing as we had a chat in T2. I have always said – you finish no matter what, the only excuse is injury (unless you are a pro of course, and you have an opportunity to fight another day a few weeks later). Looks like I am going for a run. Seriously, it was the last thing I wanted to do, but sometimes you’ve got to suck it up and get it done.

I quickly realised, the bike had taken a much bigger toll on my legs than I thought! Time to use ‘the walk the aid stations’ strategy and settle into a 5k (-ish) pace. This pretty much worked for the first 25k before the dreaded ‘Bogeyman’ turned up and started hitting my quads with a cricket bat (i.e. muscle fatigue set in proper). In my head that’s sort of how it feels. Ok maybe a bit extreme, but you get the idea. At that point it just becomes a mind game trying to manage the pain, which you always do. The only way to stop the pain is by walking. I’m not a fan of walking at the best of times, unless I’m in the mountains. So on I trundled trying to keep the Bogeyman with his big cricket bat at bay!

Eventually I crossed the finish line in 10:16 with a 3:41 run. Not what I was hoping for, but that’s IM racing for you – you never really know how the day is going to pan out. 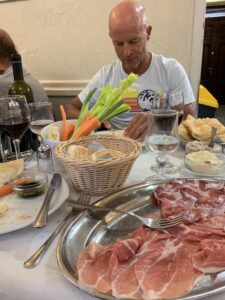 Glad I burnt plenty of calories

Now it’s time for a bit of a training break for me, a few glasses of red wine and some #dolcefarniente as they say in Italy.

PS: To all my coached athlete