The Alpe tri has been on my bucket list for quite a few years now, as I have only heard ‘bad’ things about it… ‘bad’ of course in a good sense like it’s brutal, a proper suffer fest etc.!

I guess when you are coming from the UK, it’s pretty much impossible to replicate the kind of training needed to feel comfortable on the long climbs, add to that the heat and you know you are in for a tough day out. Luckily I have been in Austria since the start of July, so have been getting a fair bit of climbing in – not much flat riding living where I am at the moment….

The famous Alpe d’Huez switchbacks from above

But back to the race – I put my name down on the waiting list a few months earlier as it had filled up quite early this year. A testament to how good the event is. Anyway I got the nod 2 weeks before the race, saying they have space for me. Result! Time to head to the mecca of cycling for a few days!

We loaded up the van again and headed through Switzerland towards Alpe d’Huez a good 6hr drive away. Although we booked a campsite to stay in the valley, at the bottom of Alpe d’Huez, we decided to ditch our plan after the first night and move up high. Think 30 degrees at midnight in a van with a dog – sweatfest! At 1800m we were greeted with nice mountain air, a few degrees cooler and a lot more bearable for Harvey (it’s taken 2.5 years, but I am glad to report he is turning into a proper good dog).

Race morning rolled round rather quick (it is a Thursday race) and it was time to roll down to the start, a good 40 mins away. Turning up in T1 with plenty of time to spare, I noticed how much more relaxed and chilled this event is compared to a lot of your other big events. There were 1300 athletes taking part. I was expecting the swim start to be quite fierce, but it was similar to the feel of the event, nice and chilled. It’s a 2.2k swim in a normally freezing cold lake, but due to the recent hot weather it was 18 degrees on the day. Balmy!

I had a pretty solid swim, hooking up with a nice sized group of about 10 athletes, which gave me a good draft pretty much all the way round, happy days!

Into T2 and I was in no hurry. It was definitely going to be a tough ride, so I decided to treat it like a bike ride, socks and bike gloves on, not a bit of aero kit in sight. I had already decided a few weeks ago to use my road bike rather than my TT bike. On that note, if you are doing this race to compete, then I’d probably go for a TT bike with a 36 small ring. You can certainly make plenty of time up in the valleys.

The bike is 120km with over 3000 meters of climbing, 3 big climbs, the last being up Alpe d’Huez. The first section is pretty much all downhill until you reach the first climb. This climb seemed to drag on for quite a while for me. I took it quite steady as I knew what was coming!

Over the top, and it was on to the descent! I do enjoy a fast technical descent. Sadly this was short-lived, as I seemed to be climbing again after what seemed like only 5 mins! 15 mins later I was over the top of this climb and descending again. Turns out this wasn’t one of the 3 big climbs, just a bump on the way down to the valley!

The next valley and the ‘second’ climb weren’t too bad; perfect for a TT bike. I big-ringed the first half of this climb as it had a nice tail wind and was not too steep until the last 3-4 kms. The descent of this climb is for sure the most technical and demanding of the race, and definitely the most enjoyable! 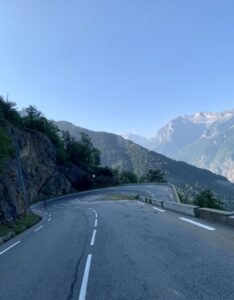 Two ‘proper’ climbs down, there was only one big climb to go – the legendary Alpe d’Huez! 13 km, 21 hairpins and approx. 1000 meters of climbing at an average of 8%. In a strange way I was actually looking forward to it. I felt quite solid for the first half of the climb, but could feel my hamstrings starting to ping with those horrible cramp feelings. ‘Here we fricken go’ I was thinking to myself. Having spent quite a bit of time on the toilet in the 24hrs leading up to the race, I can’t say I was surprised. I had decided to race in a 2-piece just in case I had to do the big swerve off the course. Fair to say, I was pretty depleted before I hit the start line.

I managed to make my way to the top with only a few, full leg lockouts. Every time I felt my hammies about to go I could at least stand and ride out of the saddle until they settled. It wasn’t all bad… Coming into T2 I went for the proper dismount, now that was a dumb idea. Both legs went into full lock out. I was literally standing there using my bike as support waiting for the pain to go away. Which, of course, it eventually did. Definitely no running my bike into T2. At this stage I was thinking, how the hell am I going to run a half marathon at 1800 meters!

On the plus side, I had been in this situation enough times before. I knew there’d be a good chance my legs would come round – it would just be a matter of time. I managed to start jogging out of T2. It was slow, but I was moving! The first 3k were pretty ugly but my legs started to feel normal-ish and I was actually running. By 5k I was actually feeling pretty good and was chugging along nicely. But if it ain’t one thing it’s another – of course all the jarring from the running got my bowels moving again, off into the portaloo I went!

Back out on the course I found my groove again and was feeling really good. I was actually running really well – for me anyway. The hammies were pinging away but I seemed to be managing them ok. The run is 3 laps on a mixture of trails and roads, with not much flat on it. You are generally going up or down. Just as I went out onto my last lap the left hammie had enough. Full lock out! It was now just a matter of survival and getting to the finish line. With a mixture of jogging and slow running I managed to cross the finish line in 7hrs 44 minutes and 91st over all.

The finish line is close

If you asked me if I’d do it again, I’d say yes 100%. It’s well organised. The entry fee isn’t a p*** take like some events! And it’s a proper fair race – not much drafting going on. As it’s a shorter run than an IM, recovery time is/should be a lot quicker, so not as much disruption to your training. All in all, a definite bucket list event to tick off. Next bucket list up for me is the Trans Vorarlberg in Austria.

See you at the races,

At Tri-1st Coaching we believe in a hand’s on, no nonsense and personal approach to coaching.